MAFY Leslie connection
There’s a jungle of different connectors between Hammond organs and Leslie speakers. It could be disastrous if you do this incorrectly. MAFY replaces the old Amphenol connectors with a 8 pole Speakon connector, which provides a much higher standard. If you use a MAFY-renovated organ you can be assured both quality and electrical safety is top priority.

This is the original design by MAFY, made publicly available for everybody to use. The old standards are inferior in quality and poor in maintainability for a number of reasons. We are positively sure the Hammond world needs a new standard based on current technology and quality, fulfilling modern needs. We’ve done the work, evaluating a large number of aspects and we are sincerely convinced that this is a very good way to go. All details are given below. 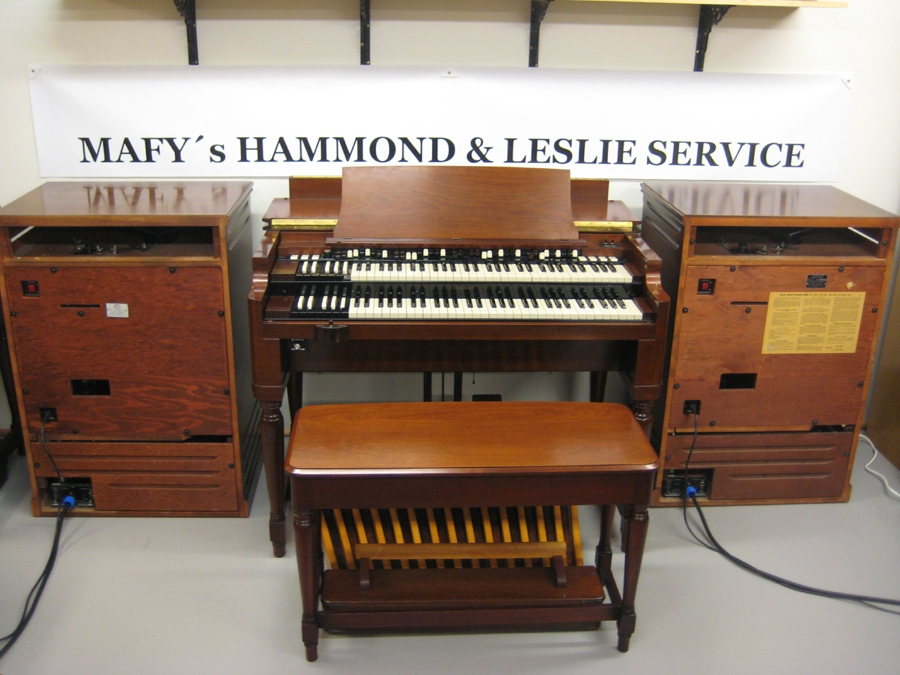 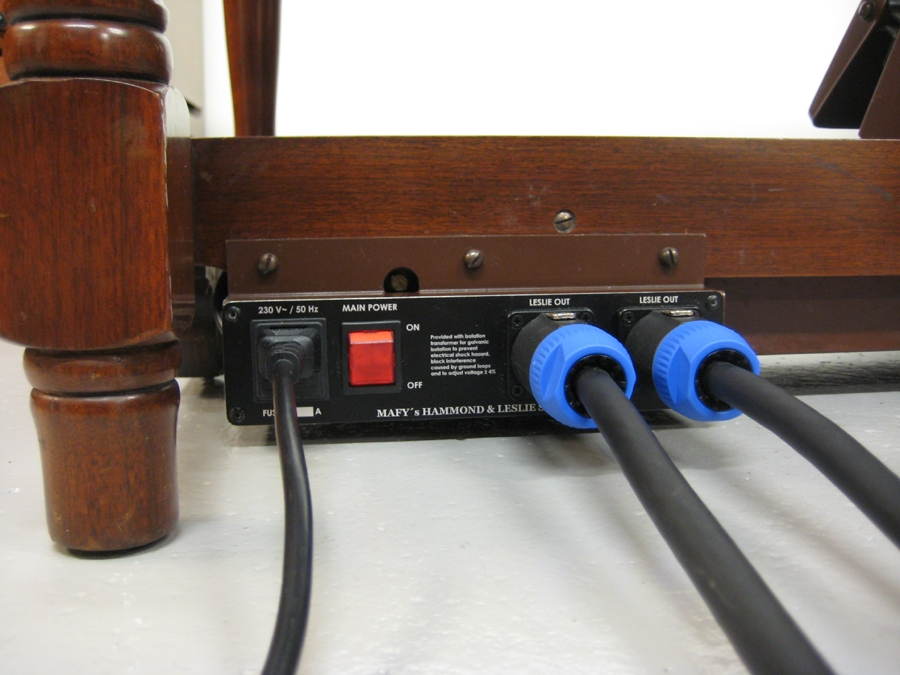 Hammond B3 with double Speakon 8 outlets for two Leslie speakers 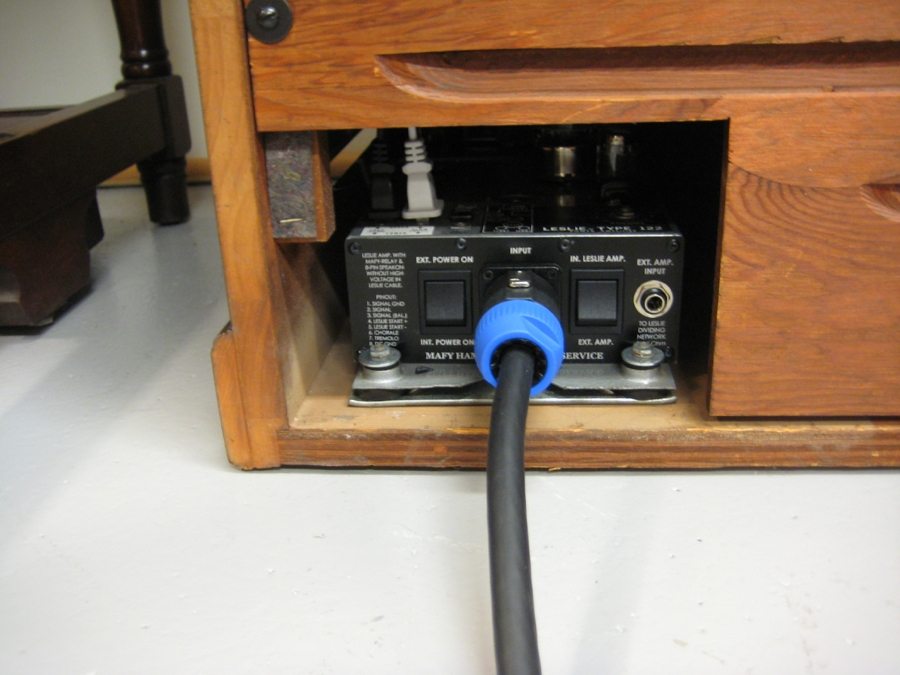 Speakon vs Amphenol
Many musicians have experienced having lost the cable between the organ and the Leslie speaker just a couple of hours before showtime, or that the old Amphenol plugs brakes when you want to play the most. To order and get a new Amphenol connector can take a lot of time and is expensive. There has to be a connector that is easy to replace just before a show if the connector breaks. That is why MAFY introduced the Speakon standard, where we use Speakon 8 pole connectors and connect them according to the schematics below. 8- pole Speakon connectors are easier to find than the original and on top of that they are very sturdy and reliable. The strain relief is far much better with Speakon than original Leslie connectors.

MAFY Speakon the ultimate standard
When new Leslie models were constructed different types of Amphenol connectors and wiring schematics were tried out. Leslie 122 has a 6 pole Amphenol connector in which the electromechanical chorale/tremolo relay is controlled by biasing 80 V DC on the sound signal. This is very unfortunate when it comes to electrical safety. A Leslie 122 is supplied with power from the organ through the Leslie cable, which is prohibited in Sweden.

The same goes for the Leslie 147, but in that case the chorale/tremolo relay is controlled with a signal with a voltage of 115 V or 230 V. Both cases exist and are equally disastrous. With the Leslie 760 and the 9 pole Amphenol connector a new standard came, which was a step in the right direction. Chorale/tremolo was controlled with low voltage. But power was still supplied through the cable between the organ and Leslie.

With the Leslie 740 the Leslie factory finally decided to follow the ban in Sweden against feeding power through the Leslie cable, from the organ. They formed a new standard based on the 11 pole Amphenol connector. This doesn’t include any high voltage in the connector neither for power supply nor controlling chorale/tremolo. Very good! Unfortunately there is no balanced signal output in the 11 pole standard, which is very bad. Today this 11 pole standard is used by all new Leslie’s and most digital organs.

Also the Swedish Nord organs stick to the 11 pole standard without balanced signal output. We have helped customers to equip their instruments with MAFY Speakon standard. When we developed the MAFY Speakon standard we wanted a high quality connector, with a robust solution which offers good strain relief and is easy to get. We chose 8 pole Speakon connectors and created a new standard reintroducing balanced signal transfer. Chorale/tremolo is controlled by low voltage and power is supplied through a separate cable. Se schematics below. 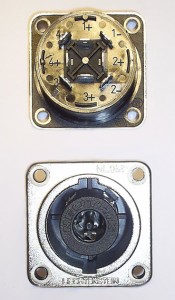 Dangerous mixing different standards
We often see strange solutions where amateurs has mixed different standards, which can be disastrous. Unfortunately we also see these mixups made by experienced workshops and technicians who claim to be skilled when it comes to electricity and electronics.

Let us give you an example: If you see a 3.5mm (1/8”) outlet the majority would think it’s a low level outlet och possibly for headphones. Depending on where the outlet is located there should always be an explaining label, instead of letting people guess what to expect from the outlet. This connector, made for low voltage signals, has been seen in organs used for switching 115V motorcontrol in a Leslie 147. The technician did not realize the risks. Furthermore the cable used between organ and Leslie looked like a belt of licorice and was far from approved for 115V.

There’s also the issue with the American AC-plug connector. The majority knows this is a connector designed for 115V and not 230V. ’Svenska Hammond’ actually made a mistake about this. They kept the American AC-plug at the organ end, but changed the plug for the wall outlet to a Swedish plug for 230V, mixing different standards.

The reason for us writing about this is that we hope that no one uses the MAFY Speakon standard without following the schematics described. If you have a Leslie 122 and mount a MAFY Speakon you should also mount a Leslie control unit, controlling chorale/tremolo with low voltage.

In Sweden there was a Hammond technician for some years who installed 11 pole Amphenol connectors and he made a connection chart of his own, including carrying 230V in the Leslie cable. Very inappropriate. Read more here.

Lately we have also seen that technicians in Norway is following our example changing old Amphenol connectors for 8 pole Speakon. Unfortunately they haven’t followed the standard all the way and made mistakes. They have only changed the connectors without doing it strictly according to the MAFY standard. They have put Speakon connectors on the organ and Leslie, but still has motor control with high voltage and power supply through the Leslie cable.

How does a balanced signal transmission work?
A balanced cable has two separate conductors where one is carrying a mirrored copy of the original signal. There are two major advantages of a balanced signal:

Any interference that nevertheless make it’s way through the shield will be evened out when the signal is decoded by mixing the mirrored signal and the original signal. Since both conductors goes the same way, they are exposed to the same interference. When the two signals are mixed, the desired signal will be twice as strong, while the mirrored interference is cancelled out. In a well-functioning balanced system interference can be up to 60dB weaker compared to a similar but unbalanced system. 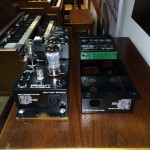 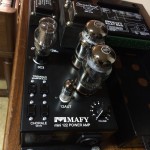 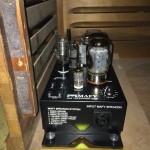